skip to main | skip to sidebar

That took some time

The Westfalia micro business really eats the few hobby-hours I have away and barely leaves me time to do what I enjoy most - Painting, modelling and generally adding stuff to my collection.

Yet I've finally found some time to do exactly that, and I am happy to present you with a little Vignette and few other things of interest.

First a Vignette that I initially started for the Salamanca competition over at La Bricole. Obviously Im like 2 months late, but it's better to be last than just chickening out!

The piece shows french amoured engineers at work in the trenches of Cadiz.
Still sloppy in some places, and the fotos are far from perfect but this is as far as I can go without adding another couple of weeks time: 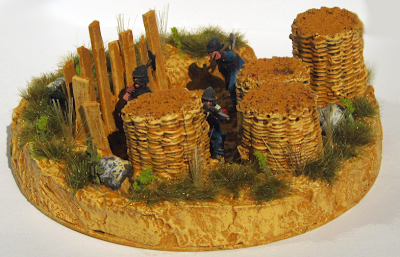 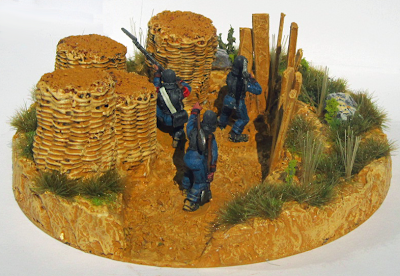 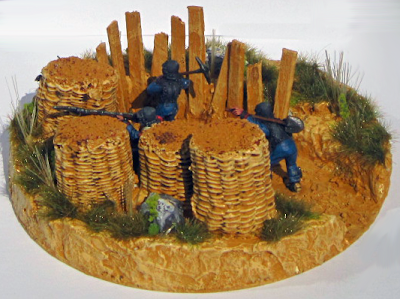 Next item is a pair of Highlanders painted by the very talented Adey Burt.
I've been told that he's offering painting-services. He can be contacted
at adeyburt (at)
Eingestellt von Schrumpfkopf um 02:57 Kommentare:

Westfalias next project is on the way. I'd like to make a little nap-quiz rather than properly announcing it. The first reader who comes up with the right answer will receive a small
unit of these gents.

Hints:
- German Foresters in British service
- Were present at Waterloo
- are said to have obtained 2 awi-2 pounders of unkown make

And here is a picture I drew for the sculptor" 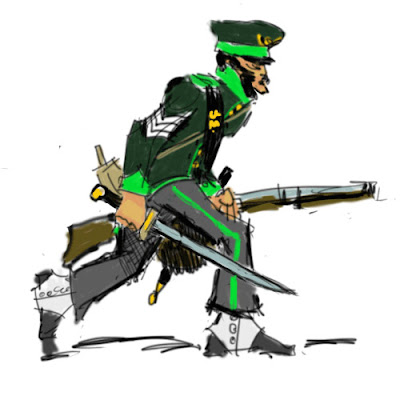 Whoever can guess the unit from my rough drawing will receive a full unit of these once the become available.

Feel free to drop me a mail to info@westfaliaminiatures.com in case you don't wish to disclose your identity in the public of this blog.

Sorry for abusing this Hobby-Blog to announce Westfalia - news.

All the parcels with Prussian medics and Highlanders got sorted and will
be posted today. We try and send a confirmation-mail on top off that.

Tomorrow we start packing all the parcels that include the Genie,
please allow for some delay as it really is serious work and we want
to do things right.

Also - I'm still painting!
Will try and post my latest battalion once the basing is done. =)